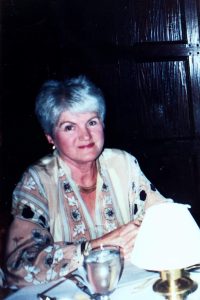 Annette Leuthold is no stranger when it comes to travel. In fact, even before she came to the United States from Switzerland in 1952, Annette lived in Yorkshire and Italy studying textiles. She came to the United States at the age of 25 with the intention of returning to Switzerland in a year. Instead, she and her husband-to-be decided to put down roots in Connecticut and get married. Never one to settle, Annette pursued various careers in insurance at Vick’s Chemical and in an antique book dealer shop until she became pregnant. She spent a significant amount of her adulthood raising her four children (three girls and one boy) in New Canaan, Connecticut. Her second home in New Canaan, built by architect Frank Lloyd Wright, served as a wonderful display of the many travel artifacts Annette and her husband collected throughout the years. Many from a trip to Africa where they started at the very southern tip in Cape Hope and traveled up through Kenya.

Following her divorce, Annette halted the life she’d grown accustomed to and went back to work. After a getting a job with General Telephone and Electronics Association (GTE), she found an ad in the newspaper advertising a job with the international dress company, Rodier Paris. She landed the position and worked closely with the President of Rodier. Her responsibilities at Rodier included completing paperwork for new store openings, coordinating models to display the clothing, and organizing the arrival of clothes to showcase. After two years in this position, Annette was ready to open her own Rodier Paris store.

With all of her children now in college, Annette seized the opportunity to try something totally different in life. She visited Dallas, the site for an upcoming storefront, and loved the city. During this visit she toured and purchased a condo. Shortly thereafter, Annette moved to Dallas and opened up her own Rodier Paris store right next to Neiman Marcus in the mall. Never afraid of a challenge, she did not shy away from putting in the work to grow her customer base when the store’s grand opening flopped. After two years, Annette had grown the store to make a profit and sold. Her next job took her next door to Neiman Marcus where she worked in the Couture department until her children pleaded with her to return to Connecticut, as she was the glue of the family.

Despite what life threw at Annette, her love of travel never wavered. While working, she took three weeks out of every summer to visit places she had never seen before. Her sense of adventure took her to Alaska to drive the gravel road along the pipeline to get to the North Sea. She also went to Egypt and Morocco, where she slept in a tent in the sand dunes. Annette says, “I’ve pretty much seen it all,” including visiting the likes of Australia, Bora Bora, Singapore, Japan and many others for months at a time.

Upon returning to Connecticut, Annette faced an unfamiliar challenge; she could not find a job. At the age of 58, she realized that companies were overlooking her skillset due to her age. She promptly whited out her age on her license and got the next job she interviewed for at Elf Aquitaine, a French oil and gas company, working for the President of the American branch. She worked for Elf Aquitaine for six years before retiring. During her absence the cost of living in New Canaan, where all of her family was located, had skyrocketed. Annette knew that she couldn’t afford to live in New Canaan as a retiree, so she set out to find her next adventure. First, she moved back to Switzerland for six months to see if she wanted to stay there as she’d originally planned so many years before. What she realized was that being closer to her children and grandchildren was more important. Returning to America, she drove down the east coast visiting many coastal cities before deciding that living on the water didn’t interest her. The next summer she made another trip down the coast and found Asheville. She rented a furnished apartment in Asheville for six months before finding a condo and settling in the Blue Ridge Mountains. During her life in Asheville, Annette has volunteered with the Visitor’s Center, Meals on Wheels and ABCCM.

About 12 years ago, Annette sold her condo and moved to Ardenwoods. She’s stayed active in the community joining social groups like Asheville New Friends, a group she meets with to hike. Moving to Ardenwoods did not mark the end of travel for Annette, either. With easy access to the Asheville airport, Annette has been able to easily travel to see her family across the United States. Five years ago marks Annette’s final trip abroad at the age of 87. She returned to Switzerland for her sister’s 90th birthday party. During this weeklong celebration, Annette visited the farm that her mother had grown up on and had the chance to reconnect with family.

“My impulsivity is what drives my travel sometimes,” she says. If an adventurous opportunity is presented to her, she’ll take it, and if none are readily available, she’ll find one! At 78, during a visit to Switzerland, Annette found herself craving adventure. She went to a local travel agent who suggested she take a bike tour through Austria. Annette joined the bike tour with no hesitation only to find that it was a little fast paced for her capabilities at this point in her life. She fell behind the group and stopped at a house on the side of the road asking to use their phone to call her guide. Luckily for Annette, she speaks German and was able to communicate with the couple who owned the home and explain her situation!

Annette says that now she keeps her traveling strictly to within the United States. Recently she flew to California to visit one of her daughters and every year she makes a trip to Maine to visit additional family. If she wants to solo travel, Annette uses the company GlobeTreks, who specialize in bus tours throughout the United States. Because her sense of adventure has never waned, Annette’s next trip with GlobeTreks is a Mystery Tour, which means that the participants don’t know where they are headed until they board the bus the day of departure!

Annette Leuthold is a great example of all of the travel opportunities that are available to residents at Ardenwoods. We feel extremely lucky to have Annette as a resident!