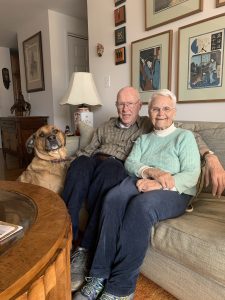 Anne and Bob met when they both lived in Shoreham, New York on Long Island. Living just two houses down from each other, they both always shared a love of sailing, even racing against each other at the local boat club where they were both members. Like many, Anne and Bob started as close friends. Both having been married previously, they were close friends for 15 years before they got together. In the beginning of their marriage, Anne and Bob enjoyed sailing up and down the east coast. Both still in the midst of their careers, Anne as a teacher working towards qualifying for retirement and Bob as a High Energy Physicist at Brookhaven Labs, their sailing was limited to their free time. It wasn’t until funding for a capital project Bob was working on for Brookhaven was delayed and ultimately pulled, that Bob decided it was time to retire. He and Anne spent the next two years planning a boat trip that would take them around the world for an undisclosed amount of time. Anne reached her 15 years as a teacher and became eligible for Social Security, and Bob retired from Brookhaven Labs. 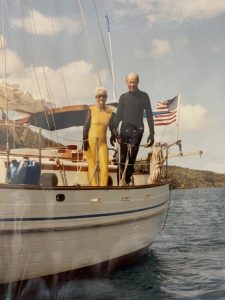 Their retirement ultimately led Bob and Anne into their greatest adventure. At the ages of 58 and 56 respectively, after all of their children had either gotten a job or graduated college, Bob and Anne sold their house, invested their money and set sail. Bob had been dreaming of this trip for years, and Anne was his perfect match, a “down for anything” partner. Although in the initial months they encountered some obstacles, Bob credits Anne with being such a savvy sailor that nothing ruffled her feathers. Their first stop was the Caribbean, where Bob and Anne ultimately decided they were going to sail through the Panama Canal and around the world. One of their favorite stops early on in their travels was in Venezuela. At the time, Venezuela had just discovered oil and the exchange rate wasn’t properly proportioned for the American dollar, so Anne and Bob lived for about a year on no more than about 5 bolivars a day! Their travels brought them to the Galapagos Islands, through the Samoan Islands, Papua New Guinea, New Zealand and finally Australia. The experience opened introduced Bob and Anne to people they otherwise never would have connected with, but they all had one thing in common according to Anne. “The people were all interested in the same thing and they were all dependent on their boat and how well they could sail.” 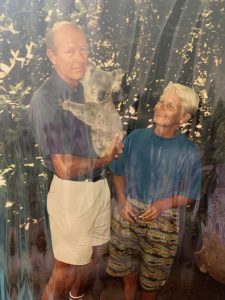 Anne and Bob spent five years sailing around the world before landing in Australia. They lived six months in South America and another six months in New Zealand as their longest stays, but ultimately their family called them back to the United States. With grandchildren on the horizon, Anne and Bob turned their attention to a new adventure… land living!

Near Beaufort, South Carolina is where Anne and Bob set up shop for 12 years. They lived on the water and continued their love of boating, Bob even expanded his interest into building planes. After their 12 years in Beaufort, the call of the sea had Anne and Bob itching to get back out on the open water. After about a year of sailing, however, they decided it was time to slow down. At this point they were in their 70s and the labor and strain of keeping a boat up to snuff was too tiring to enjoy. They moved to Pompano Beach, Florida and lived for three years. They loved Florida but it was flat and although they were by the sea, Bob and Anne’s age inhibited them from being able to take advantage of it.

As we said, the Louttits are the furthest thing from timid when it comes to uprooting their lives for an adventure. Bob suggested Asheville because Anne had lived almost everywhere, except in the mountains. They moved to Candler, right near Mount Pisgah. Seeing as they’d spent the majority of their retirement and life focusing on sailing, the Louttits never had the space for the companionship of a pet. Their property in Candler, however, was the perfect hiking spot and inevitably the perfect home for their first pet. Fifi is a rescue that Anne and Bob fell in love with at the humane society. Having come from a previously abusive household where she was constantly chained outside, it took a bit of time for Fifi to get her bearings in her new home. Fifi and Bob enjoyed long hikes throughout the property, and even return today because it’s the only place that Bob knows he can let Fifi off a leash with confidence that she will always return.

When the upkeep of their land became too much, the Louttits searched for a place to call home without the stresses of owning an actual house. Now that they had a new family member though, they had to consider a place that would accept not only Bob and Anne, but also Fifi. That is when Anne and Bob found Ardenwoods.

A few of their favorite aspects of Ardenwoods include the plethora of activities- craft groups, continued education classes and especially their individual involvement with community groups-Anne with the Ardenwoods singers and Bob with the Rocking Chair Readers. The size of Ardenwoods according to Bob was also a big draw, “this place is very small compared to almost any of the others around, and it enables the management of this place to do personal things for everybody here that you just don’t get in most of the other places, if not any of the other places.” And of course, Ardenwoods’ acceptance of animals was just the icing on the cake for the Louttits. They took a tour of the campus, had lunch in the Dining Room, where they enjoy spending their evenings now surrounded by their new friends, and the rest is history!